I can’t tell who I am, or where I live. It’s too risky, and I’ve got to be careful. Really careful. So I don’t trust anyone. Because if they find me…

I can’t tell you my last name, or my first name either. But I will tell you it’s the same first name as one of the characters in this series of books. Maybe you can guess which.

When I was a kid, I was really big into Goosebumps. I loved Give Yourself Goosebumps most, but also read and enjoyed the main series and many of the other spinoffs. I also got into Harry Potter long before any of the movies came out. In contrast, I only owned one Animorphs book – #8: The Alien. 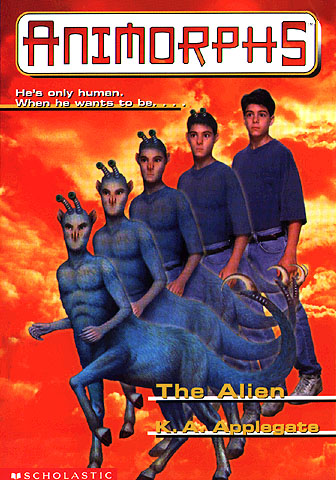 I must have read The Alien four or five times, which was pretty unusual for me, never a big re-reader. The Voyage of the Dawn Treader and Louis Sachar’s Holes were about the only books I reread more than that.

It was a great book, full of interesting characters and amusingly alien viewpoints on human civilisation. The <angle bracketed thought communication> was like nothing I’d ever seen before. For years afterwards I’d often recall ideas like “humans do things backwards: they somehow managed to invent the book before the computer”, “two legs and no tail are awkward and precarious” and “snakes can taste the air.” I was captivated by the characters of Ax and Tobias, and their friendship through a common isolation. Many of my first attempts at writing stories revolved around similar ideas of a small band of ordinary kids in a normal-seeming world were a significant chunk of the population are actually evil/mind-controlled/etc.

And yet I never read any of the other books in the series. Given that there were over fifty of them, I suppose it was just a matter of giving up at the mammoth effort of tracking them all down. That would have been the end of the story, had I not been reminded of the series by discussions on forums and a cursory mention in To the Moon (a fantastic game) and then happened upon the entire series through undisclosed means, remembered my fondness for the one book I’d read, and decided to give the series a go.

I’m going through the books in chronological order as per the Wikipedia page but with The Andalite Chronicles slotted between #23 and #24 instead of at the beginning because I read somewhere that was a good idea. Each one will get a post, detailing what the book’s about, how I felt about it, and any interesting thoughts or ideas I can tie into its subject matter. I’m not a literature critic by education, so it’ll definitely be very informal, but I’m hoping I can say a few things of worth.

At the time I write these words, I am already about thirty books in – I think that’s reasonable assurance that I won’t decide I hate the series and give up on writing this. Posts for the first ten are already written up and scheduled to go out once a week. So the first lot of posts may be somewhat retrospective in tone, and then once I catch up with where I am it’ll probably be more about immediate reactions and thoughts.

I hope you enjoy browsing my little Animorphs website!